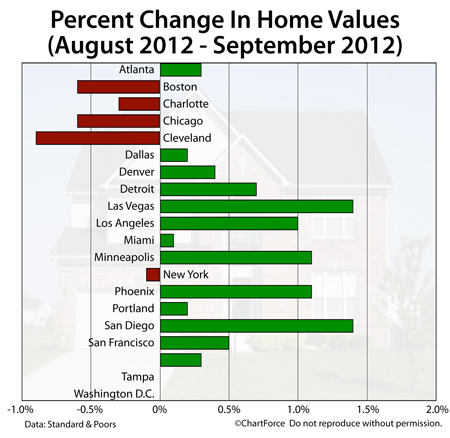 The housing market continues to expand.

According to the S&P/Case-Shiller Index, which was released earlier this week, U.S. home prices rose in September for the sixth straight month, climbing 0.3% as compared to the month prior.

The Case-Shiller Index findings are a composite reading of 20 U.S cities, 17 of which showed home price gains in September. Detroit and Washington D.C. showed slight declines, and New York City showed no change.

Leading the recovery, though, appears to be Phoenix, Arizona. The previously hard-hit city has seen home values gain 20.4% over the last 12 months. Also noteworthy is that Atlanta, Georgia reversed 26 consecutive months of home value declines in September, posting a +0.1% annual growth rate.

Average U.S. home prices have climbed back to mid-2003 levels.

Despite the index’s strong findings, however, we should remember to temper our expectations. The Case-Shiller Index — like most home value trackers — is wildly flawed. Buyers in Chicago should follow its gospel with caution.

First, the Case-Shiller Index tracks values for single-family homes only. As a result, it doesn’t account for multi-unit homes or for condos and co-ops. This is a big deal in cities such as Chicago and New York where high-rise units are common.

That said, the long-term trends as shown by the Case-Shiller Index, are overwhelmingly positive. As a Case-Shiller Index spokesperson remarked, “It is safe to say we are now in the midst of a recovery in the housing market.”